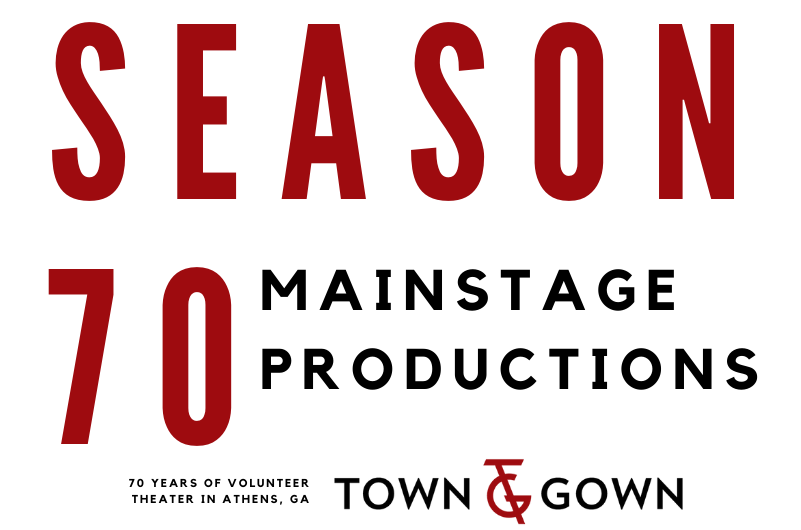 Singer Deloris Cartier is waiting for her big break. But when she witnesses a murder, she decides it’s best to step out of the limelight. What better place to hide than the convent of The Holy Order of the Little Sisters. And while the sisters give Deloris the support she needs, Deloris gives them something new to sing about. Based on the hit film, this is a Divine musical comedy!

Murder on the Orient Express
Show Dates: December 2-4 and 8-11

All Aboard for Murder! Based on the classic Agatha Christie novel, Ken Ludwig’s adaptation gives us a ticket onto the famous train when a man is found dead and a snowdrift stops the locomotive in its tracks. Detective Poirot must uncover each passenger’s secrets to find the killer before he or she strikes again!

Claudio loves Hero. Hero loves Claudio. Benedick loves…Benedick? And Beatrice loves banter! The boys are back from the war, and love is in the air. Watch one of Shakespeare’s most famous couples duel with words and wit in this beloved romantic comedy!

Spies! Murder! Fish? It’s 1952, America’s on the verge of the H-bomb, and Senator Joe McCarthy’s daughter just got engaged to a Soviet spy. Set at the feverish height of the red scare, Red Herring is a surprising, sexy, and hilarious noir comedy about love, lies, and other megaton explosives.

The middle school spelling bee is a terrifying memory for many. But when you add singing and dancing and put it on stage, it becomes H-I-L-A-R-I-O-U-S. Come see six quirky contestants (and perhaps a few audience members) vie for the crown in 25th Annual Putnam County Spelling Bee.

Lil and her female friends have been coming to the cove for years. But how will they react when a woman fleeing her marriage stumbles into their vacation colony? A classic written in 1980, this is the first mainstream play to look at the diversity of Lesbian lives.

The cost for a Season Flex Pass is $85 for Students, Seniors, and T&G Members, or $110 for Adult non-members. The cost for a Thursday Night Special Flex Pass is $50 for everyone. Flex Pass codes will be sent to you by email. Please provide a valid email when purchasing to ensure you receive your code.